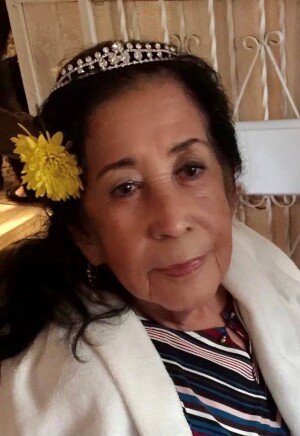 Maria-Esther DeSantiago Diaz was born on November 13, 1924, in Ciudad Juarez, Chihuahua, Mexico.  She was one of 10 children born to Antonio DeSantiago and Isabel Betancourt DeSantiago.  She had nine siblings:  Francisco, Maria-Jesus, Agustina, Marina, Herlinda, Antonio, Dionisio, Elisa, and Lasaro.  She was one of the three youngest children, along with Elisa and Lasaro.  Maria-Esther lost her father at the age of four, and her mother at the age of 14, all during the time of The Great Depression.  Her mother had taught her and her siblings a valuable lesson in life:  Be kind to each other, respect and love each other, and protect each other.

Maria-Esther came from a musical family.  Her siblings were musicians, and she sang in a beautiful soprano voice, but few people, except her children, were fortunate enough to hear her sing, as she was very private and sang mostly while doing the dishes.  She would eventually meet the young man who would one day be her husband.  She was introduced to Raul Diaz by her brother, Antonio.  Raul was in a musical, and once he realized he had met the girl he wanted to marry, he and his trio would stand outside her home and serenade her in the middle of the night, as they say, “le llevo gallo”.  They would soon be married and bring six children into the world:  Mary-Esther, Isabel, Frances, Rosa, Vera, and Roy. They worked hard to provide for their family, and decided to raise their children in Huntington Beach, a place that provided what was very important to Maria-Esther and Raul:  a clean and safe environment, lush vegetable fields, and the serenity of the ocean breeze.  She loved her “casita” and would live the rest of her life in the home where she raised all her children and welcomed friends and neighbors over for holiday parties.  She was well-liked and respected wherever she worked.  One of her favorite places of employment was at the Newport Harbor Yacht Club in Newport Beach, and with little more than an 8th grade education and English as a second language, she later made a long and successful career at Hughes Aircraft in Irvine as engineering technician.  There she was recognized for her contributions to the success of the Connecting Devices Department.

Maria-Esther will be remembered as a devoted wife who loved her husband, a warrior mom who fought and protected her children and who adored all her grandchildren and great-grandchildren.  She was a wife, mother and grandmother of a member of what has rightfully been called, “The Greatest Generation”.

To send flowers to the family or plant a tree in memory of Maria Esther Diaz, please visit our floral store.